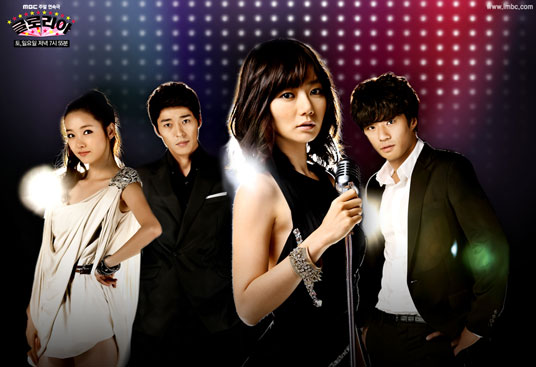 "Oh, I wish I could fly just once" A woman who never thought about having a singing career for thirty years, suddenly wants to become a singer. After taking a singing jig at a nightclub, she finds joy and happiness after finding her true voice. The story of a woman with the stage name Gloria as she embarks on a new career.

At the age of 30, she had accomplished utterly nothing. Without any parents, she grew up with her brain-damaged sister. She found work at the bag check-in counter at a nightclub. Before that she delivered newspapers, worked as a package delivery driver, drove cars as a hired driver and other odd jobs to make a living. One day, she gets into a fight with a drunken man who was harassing her sister and finds herself on the verge of being thrown into jail. Her childhood friend, Ha Dong-ah, bails her out by asking her landlord to return the rent deposit. When she comes home, she realizes that she has no home and must live in the streets. Why is life so unbearable at times? But either by fate or coincidence, she is given a chance to sing on stage when the main singer of the band falls sick! She initially thinks about lip-synching the song but then the lyrics start swirling in her head and she belts out a tune. It was the second most happiest moment in her life. There could be a purpose in her life after all. She wants to become a singer. If she could sing to her heart's content on a bigger stage... Na Jin-jin embarks on a new career to stardom to become a singer at the age of 30 at that!

He had no luck in his personal life nor does he know how to get ahead in life. He also has a terrible personality, making him probably the worst person in Korea. He hardly studied in school so he can't find a respectable job but he is physically strong and became a gangster. Although he could take a lot of physical abuse his fists weren't made for fighting. Na Jin-jin is a close friend he grew up with. But she's a girl! However, he never thought of Jin-jin as a girl. So while living in the same neighborhood for nearly all his life, he gets into silly fights with her all the time. When his older brother died in an accident, his wife ran away with the insurance money and left behind their son. So Ha Dong-ah takes care of his nephew, Ha Eo-jin, and the boy means the world to him. He wanted to raise his nephew and see him become a salary man one day but then a woman enters his life. A woman who grew up from an entirely different background from himself. Her name is Jung Yoon-seo! But due to her appearance, he falls into despair...

A man who doesn't believe that love exists. He was born as an illegitimate child of a rich Chaebol founder and due to those circumstances his life was a series of struggles. He quickly learned to stay out of trouble before trouble found him. Since he was born through an affair, he had no reason to trust love. Since he was a little boy, he was separated from his mother and came to live with his father where he had to avoid his stepmother's anger, be obedient to his father and stay clear of Ji-seok, his half-brother, who openly despised him. However, the harder he tried to be a good son, the more he grew ambitious. He followed his father's wishes and married a woman that was picked out for him. Marrying Jung Yoon-seo hurt his pride but he accepted his father's decision. But then a strange woman Na Jin-jin enters his life and rattles his nerves. He finds it ridiculous to see her try to crack her way into the music industry at the age of 30. But then he sees her sing one day. For some reason, she looks so happy on stage. He feels an urge to help her career. But something strange also happens. He finds himself happy whenever he is with her. There is peace and solace in his life when she is around...

She is the illegitimate daughter of a wealthy Chaebol founder. She has delicate looks that sway the hearts of men. Due to her grandfather's wishes, she is unable to register herself in her biological father's family register. Thus her life is full of burdens. She contemplated suicide many times because of her mother who was hell-bent on elevating her social status. She even made several suicide attempts. To take her mind off of her troubles and her real father, she started to learn ballet. She poured her heart into it. Against her parent's wishes, she even went abroad to pursue a ballet career and was chosen as the prime donna in a ballet company. But she suffered a torn ligament from intensive training before she could make her debut. Thus, her ballet career was over. She despairs about her life. She attempts suicide after losing the will to live but they fail. Then one man enters her life. He looks like a disheveled gangster. His name is Ha Dong-ah! Whenever she finds the process of marrying Kang-seok stifling and ludicrous, Ha Dong-ah would appear before her. She doesn't know why she keeps waiting for him to show up all the time.

Na Jin-jin's older sister. She once lived a glamorously life! She grew up poor and had an intense desire to become successful. Fortunately, she had a superb voice and became a singer at the age of 19. She enjoyed life as a celebrity. But life also has a way of throwing curveballs at you. Her first relationship with a married man ended terribly for her. He was the young heir to a Chaebol empire! But he was already married and their affair caused his young wife to commit suicide. Then Jin-joo also got into an accident that left her brain damaged, which totally changed her life for the worse. She was burdened with the responsibility of caring for her younger sister. But she always stayed happy throughout this ordeal because she could not recollect anything from the past...

Eldest son of Chairman Lee Joon-ho. Lee Kang-seok's half-brother. He was born with a silver spoon in his mouth. Thus, he grew up without ever being denied anything. This also instilled within him an relentless edge in reaching his conquests. He married in his early twenties through a marriage arranged by his family. He later has a brief affair with Na Jin-joo, who appeared in one of his company's TV commercials. He does not feel any guilt for ruining Jin-joo's life. He simply considers the affair he had with Jin-joo as a mistake made in his youth. But while finally returning to Korea after a long spell, he is seated next to Jung Yoon-seo and finds himself attracted to her...