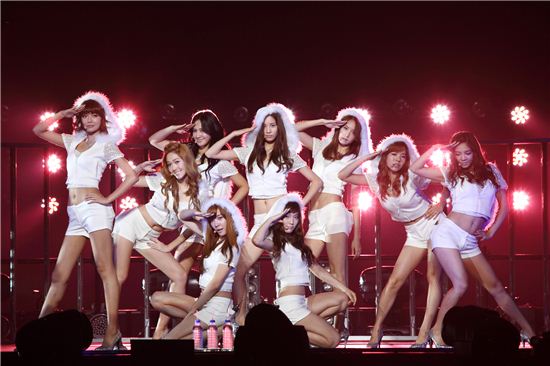 Girls' Generation performs "Genie" at their showcase held at the Ariake Colosseum in Tokyo, Japan on August 25, 2010. [SM Entertainment]


Female K-pop group Girls' Generation held their Japan debut showcase yesterday, attracting 20,000 fans to the event held at the Ariake Colosseum in Tokyo, according to their agency SM Entertainment.

SM also said that about a total 1,000 journalists, advertisers and record company officials attended the showcase where the girls sang their hit numbers including "GENIE," "Oh!", "Run Devil Run," and "Gee."

The nine-member group also revealed the music video for their Japanese debut single "GENIE" which goes on sale in the country starting September 8.

Girls' Generation's Japanese record label Universal Japan Nayutawave Records expressed its hopes for the group's activities in Japan, explaining "About 80 percent of the audience were females in their teens to twenties which proves that the interest young women have in Girls' Generation comes from the group's appeal and not the K-pop boom. This will help solidify their status in the J-pop market."

"We were so surprised to see so many fans at our showcase when we haven't even debuted...... We are looking forward to the days that lay ahead of us in Japan," the girls were quoted as saying after the showcase.

The showcase took place a total of three times instead of once -- SM extended the number following Japanese fans' heated interest in the girls.

The girls were greeted by some 800 fans upon their arrival at the airport in Japan on Monday and attendees of the showcase were purchasers of the groups DVD which placed at No. 3 on the prestigious Oricon's weekly DVD chart and fourth on the overall chart, making them the first Korean girl group to have their first DVD to rank in the top 5 slots.

Girls' Generation, has been one of the most popular groups in Korea since their debut in 2007. They performed in several countries in Asia such as China, Shanghai and Thailand for their "1st ASIA TOUR CONCERT - Into the New World" last year.

The girls will soon fly to Los Angeles in the United States to take part in the "SMTOWN LIVE '10 WORLD TOUR" to be held at the Staples Center on September 4.