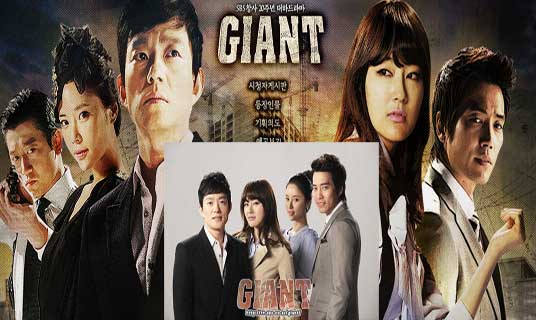 SBS' new drama "Giant" spans over 30 years, and both makers and actors hope it will captivate viewers.

The 50-episode television series revolves around young and passionate characters making a living and searching for their goals and love in Seoul during the busy 1970s.

"The drama `Giant' is based on one man's success story, who made it through the dangerous urban jungle thanks to his wisdom and courage. We hope the drama will bring a sense of joy and comfort to viewers. Moreover, the show will also help people realize the true meaning of success in this corrupt world we live in today", SBS said through a press release.

The drama features the highlights of the city's development, bringing politics, power and money to the small screen. Money was all it took to gain power, and so, many, including Lee, had every reason to fight for it no matter what.

"It was a bit of a burden as I had to act a character whose life span ranges from his 20s to his 50s", Lee Beom-soo, who plays the main character Lee Gang-mo, said during a press conference Tuesday.

"But I thought I would give it a try", he added with a smile.

Seoul was in the middle of a huge transition during the 1970s, both socially and financially, thus giving birth to various stories and incidents regarding poverty, priorities and success. Lee Gang-mo was in the middle of all three. Born to a poor family in the late 1950s, Lee loses his father in a mysterious murder right after birth. The young Lee struggles to make a living and finally takes his ill mother and sister to a small motel and continues to make ends meet by begging and singing in the streets. One night, he buys some briquettes to heat up the room but the motel owner accidentally causes a gas leak, killing those inside, including Lee's mother. The heartbroken Lee vows that he will never be poor again and begins his lifelong journey toward success.

Like any other rags-to-riches story, or typical Korean drama, there is always a twist regarding competitors and lovers.