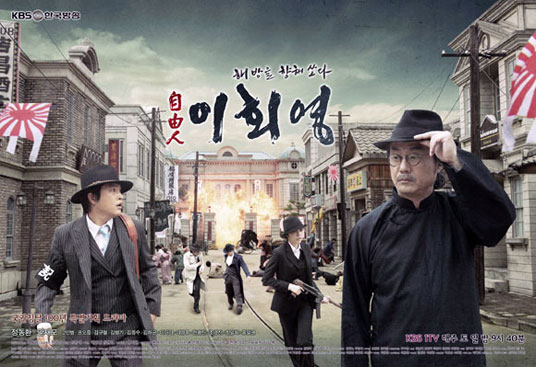 A four-part drama produced for the 100th anniversary of the occupation of Korea by Japan. Freedom Fighter, Lee Hoe Young will be the third and final installment of a series of dramas by KBS that focus on noblesse oblige and famous inviduals who sacrificed much to provide for their fellow countrymen. Lee Hoe Young was an independence fighter who donated his savings and started a school for soldiers and scholars in China, but was later captured and tortured by the Japanese. Kimura Junpei is a Japanese reporter he meets.

A 4-part drama for the 100-year anniversary of the occupation of Korea by Japan. Ahn Jae-mo plays a reporter for a Japanese newspaper.

Responsibility of the haves: Stand up to the challenges of the time.


We fight to take back what was taken, our country.

Freedom fighter Lee Hoe-young acted on this belief all his life. When Korea was colonized, he opened a martial arts school in Manchuria and honed fighting his skills.
He also joined the anarchist movement and "violently" fought against the Japanese to the end. He was labeled a "terrorist" in his days.
But to Koreans, he is no terrorist but a freedom fighter. Japan was the first to wield violence on Korea.
The victimized, in the name of justice, need to mobilize "violence" to destroy the evil system established by the stronger power.
The call for fair play between the strong and the weak is nonsense and is only an ideology serving the stronger power.

Lee, seen in the eyes of a Japanese reporter

How can we view the violence of the weak? This drama takes the form of coverage of Lee by a Japanese reporter, through which it aims to depict Lee perceived in the eyes of the Japanese.
The story follows how the Japanese reporter, an enemy, comes to understand and eventually respect the "terrorist Lee" in a calm, and often emotional, narrative.
The reporter thinks it's odd that Lee, born into a prestigious household in Joseon, gave up everything he had and chose the way of life as an impoverished terrorist. He ponders on what life and death meant to Lee, who journeyed on a long and painful fight against Japan.
And the reporter will ultimately realize that as long as Japan violently suppresses Joseon, no violence whatsoever can crush the Korean "terrorists" and the Japanese will forever live in insecurity and fear.

Among Lee's siblings, only the fifth, Lee Si-young, managed to survive until Japan was defeated in the Second World War in 1945. All the others died of either torture or famine.
The length of Lee Si-young's life in exile was the exact 35 years Korea was colonized by Japan (from the book "Lee Hoe-young and the Young Men" by Lee Deok-il).

Korean independence was fought for. It was won thanks to the numerous Lee Hoe-youngs who refused to put down their guns and knives to the end, the Korean people who ardently supported them which affected international opinions. But is this how we see independence these days? Do we not regard it as something granted to Korea owing to the world situation at the time?
Do we not think that if Korea made modest preparations, independence would have eventually come without having to fight to such extremes?
But Lee says, "Wake up and face the truth. Don't live an easy life." Lee's way of activism was a far cry from independence efforts involving diplomacy, preparation and raising talent.
His goal was to take back with brute force his country, which was violently taken away. As national sovereignty lies in a country's defense power, Lee believed in physical strength as the fundamental force upon which to advocate independence and freedom. He shouts to us through this drama that taking on this responsibility was only the natural thing to do.