Footage of 2NE1 collaborating with Will.i.Am to air today 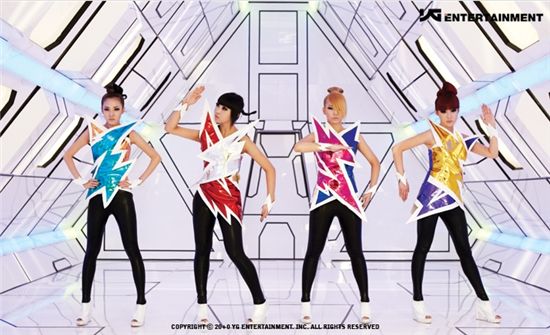 
A video of Korean female idols 2NE1 working with The Black Eyed Peas frontman Will.i.Am will air on cable music channel Mnet today, according to a press release from YG Entertainment on Tuesday.

YG announced that through TV show 2NE1 TV season 2, the upcoming episode will reveal the quartet preparing for their debut in the United States with Will.i.Am, starting with their first encounter with the singer at his recording studio.

In August, YG's CEO Yang Hyun-suk had explained through the agency's official website that the girl group visited London and Los Angeles to record ten songs produced by the rapper himself.

According to Yang, Will.i.Am has offered to help 2NE1 expand their music career into the United States after watching a music video of the girls but they have yet to announce the date of their debut in the country.

Composed of members CL, Bom, Sandara and Minzy, they have been one of the most successful girl groups in the country since their debut in May 2008.

They recently released their first full-length album "To Anyone" whose three title tracks "Go Away," "Clap Your Hands" and "Can't Nobody" have topped various web-based music charts as well as televised music shows.