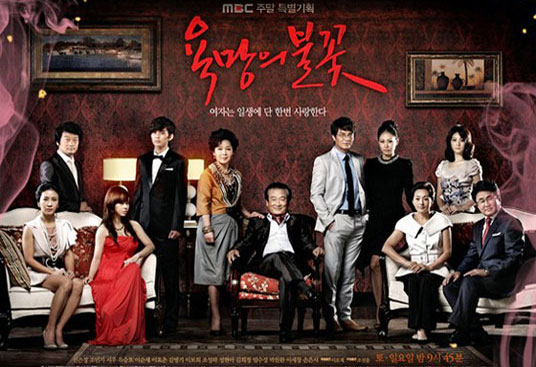 Also known as: Flames of Ambition, Women Only Love Once in a Lifetime

Revolving around the bickering members of a superrich family, their greed and ambition bring them into a downward spiral. The drama shows how the pursuit of material wealth and power does not bring happiness and for some, it can be a curse. Star-crossed lovers and demeaning treatment towards people perceived to be of a lower station are used as story arcs in the drama and also as lessons to viewers. When the family members conspire against each other to seize control of the family business, the intricacies of each characters' personality is portrayed vividly, giving them a three-dimensional persona. Rich people are just like normal people and also have normal problems once you look beyond their enormous wealth. Despite being beset with typical problems that families have, these rich family members have to keep up with appearances that they command a loftier place in society and hardly deal with problems that the Average Joe faces. This drama peels away those layers to show that they are humans too with flaws.

Starring Yoon Na-young (Sin Eun-kyeong, 46)Kim Young-min's wife. She was a headstrong girl when she was growing up. To guarantee her happiness, she will use any means to get what she wants. Her face can change from a scowl to a smile in a flash depending on her mood.

Kim Young-min (Jo Min-ki, 48): The third son of the chairman of Atlantic Group. His dream was to become a college professor but after his father arranged him to marry Yoon Na-young, his career plans abruptly changed. Unable to disobey his father's wishes, he joins the family business and faithfully toils at the company. He is depressed that he can't be with his sweetheart and this sadness consumes his heart. When his brothers fight over control of the Atlantic Group, he takes a neutral position but shows compassion towards both of his brothers as he values family more than anything else.

Kim Min-jae (Yoo Seung-ho, 24) Son of Kim Young-min. He is a nave boy with a sweet personality. Like his father, he is not interested in the business of making profits. His main interest is art. He falls in love with a girl and accepts her heavy past with an understanding heart. Even when he learns who his real mother is, it doesn't make him waver from choosing the girl he wants to spend the rest of his life with.

Baek In-gi (Seo Woo, 23) Baek In-gi is a movie actress who is a divisive figure. Some people despise her while her fans adore her. She is able to overcome her heavy past and break out as a successful actress. She considers relationships and the attainment of wealth as a game of luck and cunning, and thus, she believes happiness will come to her if she emerges as a winner.