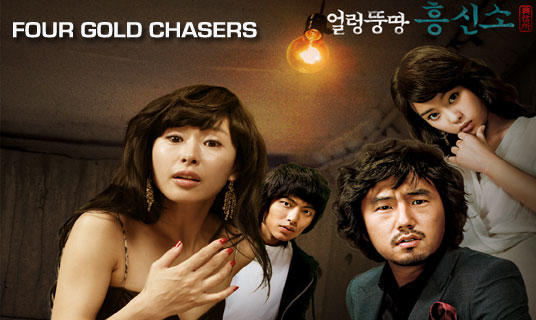 The three characters of the drama -- Moo-yeol, Yong-soo and Hee-kyung -- work in a shabby five-storey building near an ancient palace in downtown Seoul. Moo-yeol is a cash-strapped instructor at a taekwondo center; Yong-soo owns a comic book store and lives with no dreams and hopes and nobody to take care of him; and Hee-kyung is a taro card psychic, who wins clients with her impressive acting skills rather than with her magic powers. There are many vacant suites in the building, which is on the verge of a collapse. One of the empty suites used to be a credit bureau before its owner ran away.

One day, Moo-yeol and Yong-soo receive a request from an affluent lady to find her Persian cat that she lost in the former credit bureau. In a moment of bewilderment, the two take on the role of bureau staff to find the cat but the task proves quite difficult. The owner of the building says he heard a baby-like cry coming from the basement. The fainthearted Hee-kyung takes Yong-soo and Moo-yeol to the basement, where they find the cat as well as three kittens and three leaf-shaped gold nuggets. Ecstatic about their discovery, the three rush through the ramshackle basement but suddenly run across a skeleton. Several days later, Moo-yeol also finds an extremely beautiful woman who has collapsed on the rooftop of the building.

as Moo-yeol: A taekwondo instructor who sees the number of his students dwindle by the day due to the growing popularity of English and math cram schools. He agonizes over whether he should close his school, and hopes that Korean national taekwondo athlete Moon Dae-sung will win gold at the Beijing Olympics to revive the popularity of taekwondo. Moo-yeol never performed well in school because of intensive taekwondo training since early childhood. Sometimes he feels inferior to others due to poverty and the lack of education but thanks to his upbeat personality he easily gets over that. One day he accidentally gets involved in an adventure that takes unexpected turns.

as Hee-kyung : Having excellent skills at deceiving people and collecting information, Hee-kyung works as a taro card psychic but has no supernatural powers whatsoever. She lures customers using her charm and acting skills, which she acquired while freelancing for a third-tier theater troupe. Fraud has become part of her everyday life. She knows better than anyone else about the ugliness of humans because she has seen and heard about inhumane acts since childhood. She doesn't feel guilty about her fraudulent acts committed on humans yet she wants to live as an ordinary person and be like others, which probably explains her obsession with luxury goods. She no longer wants to be treated as a monster and is scared of ghosts. She joins the "gold rush" adventure to begin a life of luxury.

as Yong-soo : A comic book store owner who has no dreams or hopes. Lazy, timid and irresolute, he chose an easy path for himself believing that life is not worth trying hard. He has acquired extensive knowledge from comic books while running a comic book store in the past several decades -- to the extent that he can determine the time of death from purple spots on a dead body. But unfortunately his knowledge reveals its shallowness in an instant. He is bad at everything that requires physical skills. Sometimes he faces hardships because of Yong-soo's dullness. He joins the "gold rush" only for fun, but doesn't know what he wants to do with gold once he finds it.

Eun-jae : This enormously rich lady makes her first appearance in the drama when Moo-yeol finds her on the rooftop lying unconscious. Life in the building changes completely after she moves in and asks Moo-yeol and others to investigate the body that was found in the basement for a generous reward. To unravel the secret of the building, she joins hands with Moo-yeol, Yong-soo and Hee-kyung, but there is an invisible wall between them because Eun-jae has lived an unhappy yet affluent life whereas the other three never had a chance to indulge in luxury. Hee-kyung, in particular, fights with Eun-jae over everything. Eun-jae doesn't trust people because as a child she saw many times how her relatives fought over property. She heads the "gold rush" adventure because she wants to know its secret.

as Baek Min-chul : A gangster who looks good in a business suit. He is strong enough to instantaneously beat Moo-yeol, who had never lost in a fight before. To obtain information, he approaches Hee-kyung. Nobody knows why he joins the "gold rush" and who is behind him.