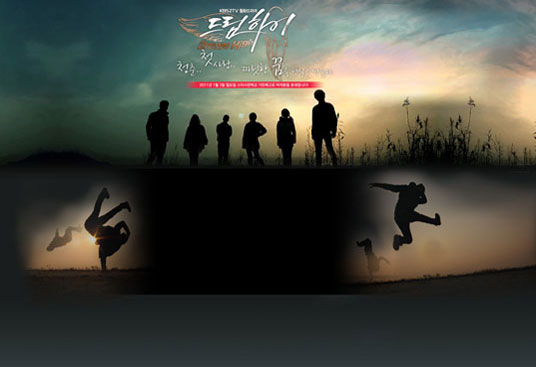 Students at an arts and entertainment school mature as they face incidents and struggles. This movie shows singing, dancing, and acting and also shows the true side of the entertainment industry.

Go Hye Mi is the main character of this drama. Originally from a wealthy family, after her mother's death, her father's business failed and their family fell into debt and her father went to other countries. She is pursued by debt collector Ma Doo Shik and his men for much of the beginning of the drama.

Song Sam Dong is a naive country boy who follows Hye Mi to Seoul after falling in love with her. He has an exceptional innate musical aptitude without any formal training. Hye Mi gives him a make over where he transforms into a "hottie" and he gets a haircut that resembles Jin Guk's.

Jin Guk is a childhood friend of Go Hye Mi and he constantly tries to help her. He tries to get Hye Mi to remember their childhood memories. He excels primarily at dancing and rapping. He sings a ballad as his showcase song called "My Valentine". He is in a love triangle with Go Hye Mi and Yoon Baek Hee. After performing with Baek Hee at the music showcase, he debuts with one of Korea's top entertainment agencies as a member of a group called "Group K".

Baek Hee is Hye Mi's best friend and sidekick at their old school, but she is betrayed by Hye Mi during the Kirin School audition. She is devastated by the betrayal and becomes Hye Mi's biggest rival. She is surprised and confused when she discovers that Hye Mi is apologetic for her actions and wants to be friends again. She has a crush on Jin Guk and is jealous of Hye Mi, who holds his attentions.

Kim Pil Suk first appears as a girl wearing a sushi mascot costume during the auditions. She is a girl with a beautiful voice and perfect pitch but is overweight. She has a major crush on Jason, and leaves a lollipop on his locker every day.

Jason is an American exchange student who excels mainly in dancing but is also good at singing. He is courteous and has good manners, leading to misunderstandings with Pil Suk, who believes that he does this because he likes her.