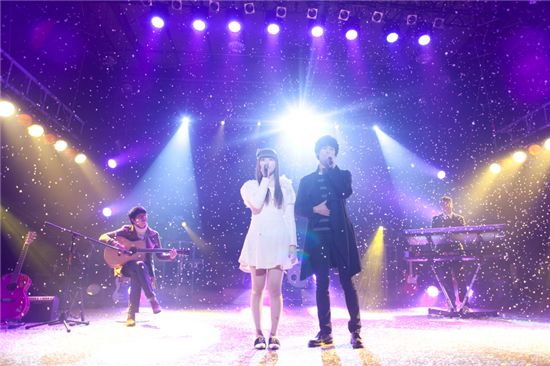 
Teenage idol drama "Dream High" continued to take the lead amongst primetime TV series aired on Mondays and Tuesdays, according to data released by two major research firms on Wednesday.

Dream High which showed only on Monday this week due to the Korea versus Japan soccer match for the Asian Cup Qatar 2011 the following day, posted a viewership rating of 15.3 percent and 15.9 percent on polls by Total National Media Researchs (TNmS) and AGB Nielsen Media Research, respectively.

The figure logged on TNmS is an improvement of close to two percent compared to last week's average while also a slight on AGB's chart.

Starring Kim Soo-hyun, Bae Suzy, Ok Taecyeon, Ham Eun-jung, Jang Woo-young and IU, this week's episode featured a false showcase arranged by students who did not make it to the finals for a real showcase but still eager to prove themselves.

SBS spy thriller Athena came in second, marking scores of 13.3 Percent and 15.2 percent on TNmS and AGBs surveys, respectively, marking a slight improvement of about one percent from last week.

"Athena" went on air only on Monday as well due to lead actor Jung Woo-sung in recovery from an injury he suffered while shooting an action sequence for the show last weekend. SBS instead showed Athena: Soo Aes Secret composed of interviews about creating drama.

Starring Jung Woo-sung, Soo Ae, Cha Seung-won and E Ji-ah, "Athena" is largely about agents of the National Anti-Terrorist Service (NTS) fighting against terrorist group Athena. Mondays episode featured the death of NTS agent Jae-hees (played by E) father who has secretly been working as a member of Athena.

Meanwhile, MBC series Queen of Reversals which ran on both days, scored average viewership ratings of 10.5 percent, according to the findings of TNmS and 14.3 percent on AGB, the figures sliding down by 0.4 to one percent from last week.

The show starring Kim Nam-joo, Jung Joon-ho and Park Si-hoo this week showed Hwang Tae-hee (Kim) deciding to fly out with her ex-husband Bong Joon-soo (Jung) who has been appointed at his company's overseas branch when Kim and director Goo Yong-shik's (Park) affair gets revealed.