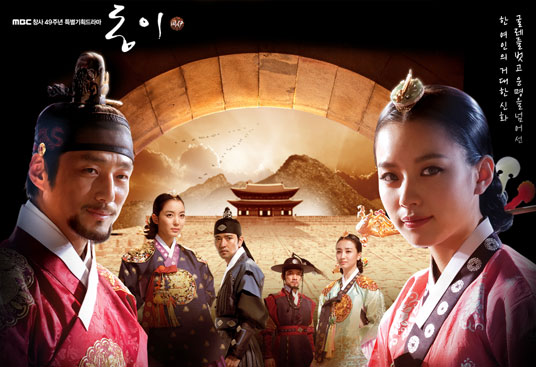 "Dong Yi", a historical epic helmed by famed director Lee Byeong-hoon whose previous works including "Jewel in the Palace" ("Dae Jang Geum") and "Heo Jun", stars top Korean actors Ji Jin-hee and Han Hyo-joo. The first episode of the show, about Dong Yi who grows up to become Choi Suk-bin, a consort of King Sukjong and the mother of King Youngjo during the Chosun Dynasty, featured the life of young Dong Yi played by child actress Kim Yoo-jeong.

Set during the reign of King Sukjong in the Joseon dynasty, the story focuses on Dong Yi, a water maid who gains the trust of Queen Inhyeon and later the favour of the king when he is moved by her prayers for the health of the Queen during the court disputes caused by Jang Hee Bin. Dong Yi becomes a concubine with the rank of sook-bin and bears a son who will later become the 21st king of Joseon, Yeongjo.

The most important responsibility of the premiere episode in an epic historical drama, which tells of a success story of a character, is to stamp a clear image of the main character into the minds of viewers. And drama "Dong Yi" successfully achieved that mission through a five-minute relay sequence where the young Dong Yi (played by Kim Yoo-jeong) first appears in the show. Dong Yi -- the girl with naked ambition who does not hesitate to use tricks or break rules in order to beat a civilian boy who looks down on her. The scene where she runs with all her might through the narrow market streets full of obstacles was beyond appropriate to symbolize her future destiny, where she will run full force after breaking free of the double restrictions of being a commoner and a female.

Besides explaining the main character, the first episode of "Dong Yi" also took time to introduce two other main subjects in the drama which will lead the story -- the scene where government musicians perform and the influence of crime organizations during the Chosun Dynasty period. A little more weight was given to the latter issue. The world of organized crime where blood-spattering power struggles are combined with exciting mystery action, will be shown in contrast to the passive world of traditional Korean music, making it the key to delivering the fun factor in "Dong Yi" until Jang Hee-bin [Korea's royal concubine who became Queen by marrying King Sukjong] appears in the show.

It will probably be better for "Dong Yi" to put more effort into displaying elaborate mystery scenes rather than awkward action scenes which will inevitably draw comparisons with KBS TV series "The Slave Hunters". The premiere episode of "Dong Yi" did not stray too far from the expectation that it will be a typical [director] Lee Byeong-hoon-style of traditional drama which talks about how the main character grows up and matures. But the veteran director's challenge to mix fresh and interesting subjects into a commercial epic story is still exciting to watch. If there is one thing to be desired of the show, it would be that this intelligent woman shining with brilliance grows up to be more than just a kingmaker as we already know her as.