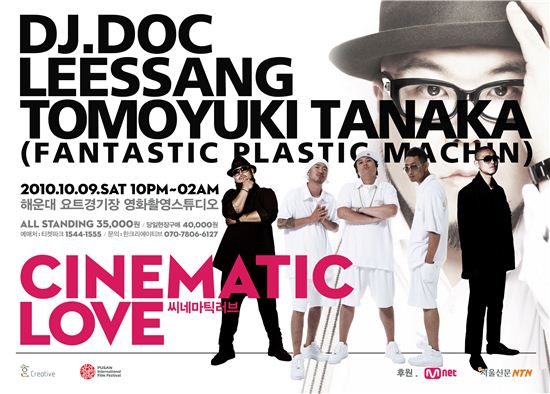 
Korean artists DJ DOC and LeeSSang, and Japan's Fantastic Plastic Machine will perform at a concert during the Pusan International Film Festival (PIFF) which kicks off tomorrow.

Khan Creative, the concert's host, said through a press release that the three will take to the stage of the "Cinematic Love" concert and party to be held October 9 at the movie studio of the Yachting Center Busan city's Haeundae.

Up and coming Korean groups SOUL DIVE, Electroboyz and Girls Day will also make appearances, opening the concert to be held at hall B of the studio at 9 p.m.

On the other side of the studio, at hall B, a party with club music will take place starting 10 p.m.

"Cinematic Love" is one of PIFF's official parties which has been taking place every year since 1995.

Trio DJ DOC, one of the most popular hip-hop groups in Korea in the late 1990s, returned to the music scene for the first time in six years with their seventh full-length album this July which topped various music charts for a few weeks.

LeeSSang is Korean hip-hop duo composed of Gary and Gil who formed in 2002 and have collaborated with some of the country's top hip-hop artists including Drunken Tiger, T and Big Mama King.