Crashing into wedding shop scene of MBC "The Greatest Love" 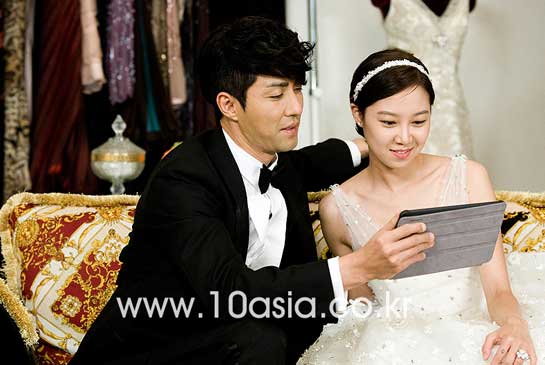 
Dokgo Jin (Cha Seung-won), dressed in a tuxedo, waits for Goo Ae-jung (Kong Hyo-jin) -- the lover he has finally come to see a happy ending with after a confession, execution of potatoes and a heartbreak. They had to repeat the same lines six times for the scene where they sit next to each other and on a tablet PC, look at supportive messages from fans around the world because of having to show the scene from different angles but the string of tenderness binding the two together did not break. When Kong showed slight signs of fatigue as the waiting time in between the shoots grew longer, Cha bellowed out, "Goo Ae-jung, you can do it!" to which Kong then replied with a smile, "I can do it!" No wonder the they looked so natural doing it in the drama as well.

It is also up to the actors to boost the morale of the crew who were filming till 9 a.m. the night before. While Kong's appearance in a wedding gown drew exclamation from the crew, Cha's arrival instilled additional vigor to the set. And when a member of the crew announced, "Dokgo Jin has arrived," Cha stood in front of the camera, changing "Hey Hey" which everyone followed to loudly, regaining focus and tension for the show. Thanks to that, the atmosphere on set for filming of the finale episode of the show where everyone had to struggle till the last minute was full of energy than dead serious. Everybody was probably able to bear with their fatigue and live broadcast-like filming schedule thanks to a crew which brought their copies of the script for Dokgo Jin's autograph and the actors saying, "It's okay to drink on a day like this," to members of the cast who were done filming their part. MBC's primetime series "The Greatest Love" had helped viewers let off their steam every Wednesdays and Thursdays. But the real stress-reliever to the show were the two main leads.