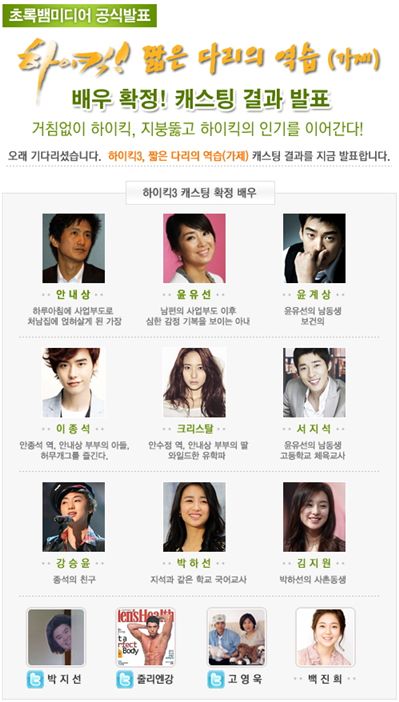 
The complete cast and premiere date for the upcoming season of MBC's "High Kick" has been revealed, according to the show's promoter 3HW.Com.

"High Kick 3," to be helmed by Kim Byung-ok who also produced the previous two seasons of "High Kick," will tell the story of how married couple Ahn and Yoon Yoo-sun who move in with Yoo's brothers, played by Yoon Kye-Sang and Seo, after his business goes bankrupt.

Lee and Krystal will take on the role of the children to Ahn and Yoon while Kang will play Lee's friend and Park a colleague to Seo. Actress Kim will play Park's cousin and Baek will be a junior to Park.

Comedienne Park Ji-sun, singer Go Young-wook and model Julien Kang have been cast in the series as well, making it their first time to take on acting.

"We have finalized the casting for 'High Kick 3' which we feel will match the characters that they will play," a producer from Chorokbaem Media was quoted as saying.

The new season of "High Kick" will take over the daily timeslot after current sitcom "All My Love" ends its run.