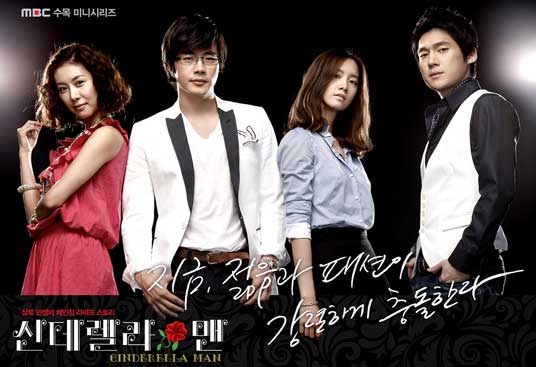 A story of a rich man (Lee Joon Hee) who switches lives with a man who looks identical to him only the difference between them is the other man is poor (Oh Dae San). Seo Yeo Jin is a girl who studies at fashion design school in Paris but returns to Korea after her life is turned upside down when her father dies.

There's not much to life. It's all about getting that one lucky break! Dae-san sells his own clothing designs at a small shop in Dongdaemun Market and all he thinks about is getting rich. One day, he crosses path with Joon-hee and finds that they share an uncanny resemblance to each other. Joon-hee, who is also the heir of a fashion empire, asks Dae-san if he could pose as him for a month. While secretly posing as Joon-hee, Dae-san uses his savvy business skills to outmaneuver Lee Jae-min and also finds true love. But then his cover is blown... Singer Yu-na and Asian star Kwon Sang-woo play the leading roles in this TV miniseries!

Sells clothes in the back alleys of Dongdaemun Market and obsesses about getting rich. Tall and handsome, he is a hustler and dresses well as he marches ahead on the road towards becoming a successful merchant. Growing up as an orphan, he does not fear failure nor does he trust anyone. He meets Lee Joon-hee, heir to a fashion empire, by coincidence and when Lee sees that Dae-san looks just like him, he asks him if he would switch places with him...

An aspiring designer. She has a sharp sense of style and a lot of pride. One of the star graduates of a famous Paris fashion design school, she starts from the bottom in the fashion industry by working for Dae-san when her father, a clothes wholesaler, suddenly passes away. She doesn't get along with Dae-san and constantly quarrels with him. By chance she meets the rich Lee Jae-min again whom she met before in Paris. His family owns a fashion empire and she can't make up her mind whether to choose Jae-min or Dae-san, whom she has gradually grown fond of. Beautiful singer Yu-na of the popular Girl's Generation girl group stars in this TV miniseries!

Eldest son in the family that owns a fashion empire. As Joon-hee's stepbrother, he makes decisions after weighing all the options before him and has impeccable manners. He is at odds with his step-grandmother, who wishes to hand over the reins of the company to her grandson Joon-hee, who also happens to be a talented businessman. The only woman who gives him comfort is Seo Yoo-jin, whom he met in Paris but he figures that he must marry Jang Sae-eun whose family is very wealthy and influential...

The only daughter of the founder of a mutual fund empire. She studied fashion design overseas. Having sultry good looks, she did model gigs during her high school years. She is very conscious about the latest fashion trends. During her time abroad, she regrets turning down Jae-min when he proposed marriage to her, and so she wants to give him a second chance to rekindle their relationship. But she gets upset when Jae-min doesn't show much of an interest in her. Then she spots Oh Dae-san and is attracted to his street smarts.

Second son of the founder of a fashion empire and heir apparent. He's tall and has an athletic build. He's handsome and has a sharp eye for style. But he's arrogant and hates complications in his life. He was sent off to France where he spent 19 years of his life. Upon hearing about his father's illness, he returns to Korea and his grandmother, the chairwoman of the company, makes him take a managerial position at the company. Having a heart problem just like his later mother, he asks Oh Dae-san, who is his lookalike, to pose as him for a month so that he can secretly get a heart operation without anyone in his family knowing about his medical condition. And with that he goes off to Paris for his operation...