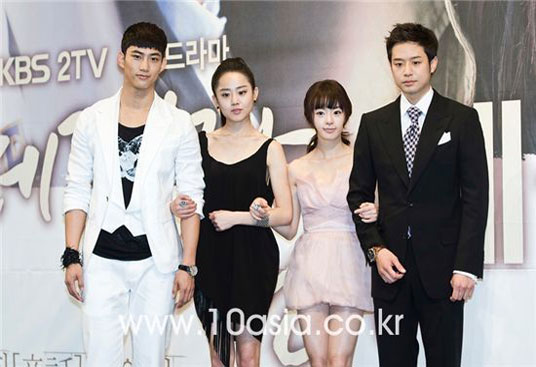 In one sentence: A fairy tale that is not like a fairy tale in which Cinderella's Sister who has lived an unhappy life tries to become happy even if she has to take what her younger sister Cinderella has.

"And so they lived happily ever after". The fairy tale takes onto its path toward reality after the period mark of this sentence. The average person would not remember the stepmother who made Cinderella become covered with soot or the sister who was so greedy that she tried to cut off her toe and heel to force her foot into the Glass Slipper, but TV series "Cinderellas's Sister" focuses its story on those very forgotten characters. As Cinderella's Sister Eun-jo (played by Moon Geun-yeong), who had nothing from the beginning, tries to take what Cinderella Hyo-seon (played by Seo Woo) has -- everything but a mother's affection -- the fate of these stepsisters slowly start to interlink. Thus, the question that writer Kim Gyoo-wan is said to have asked as he started writing the story -- "How would the story unfold from the perspective of someone who takes things away from another person?" -- serves as an important hint to how "Cinderellas's Sister" will progress.

The moment that Eun-jo tries to abandon and leave her mother (played by Lee Mi-sook), who has been a burden to her all her life, she meets a fatherly dad (played by Kim Kap-soo) and cheerful, kind-hearted younger sister Hyo-seon for the first time. But when Hyo-seon tries to take the love of her one and only mother, Eun-jo cannot forgive her and decides to steal everything that her younger sister has, including the Glass Slipper and her white knight by the name of Ki-hoon (played by Cheon Jeong-myeong). Hence, "Cinderellas's Sister" is saying that in a drama where a character usually regarded as a villain is placed in the center of that story, nobody can be good or bad. But even with the human nature hidden inside a happy fairy tale and cruel truth, the talent of writer Kim Gyoo-wan, whose previous works "Piano" and "Spring Days" drove the characters to extreme situations of love, is expected to deliver the gripping intensity that one can experience in a melodrama about young people.

"If previous series "IRIS" and 'The Slave Hunters' were of male sentimentality, 'Cinderellas's Sister' will be an adult fairy tale for women", explained President Lee Sang-baek of production company A Story. Just like he said, the highlights video revealed a sensitive take on a scenery somewhere between a city and countryside and the quivering pupils of Eun-jo and Hyo-seon, who seemed to be standing at some border after passing adolescence. The original stories of widely known fairy tales are actually closer to being not a beautiful story but to a brutal fairy tale where the selfishness and greed of humans clash. "Cinderellas's Sister" is probably a story that is closer to the latter. Thurs, "Cinderellas's Sister" will be a drama that tells of deficiency and desires born out of that deficiency. What will the ending look like for this young melodrama, which deals with the heaviest and most serious theme out of all three public networks' Wednesday/Thursday dramas that will simultaneously kick off on March 31? Will it just end up being a fairy tale or not? Whether Cinderella's Sister, not Cinderella, will be adored by viewers or not seems to depend on how well and relatable the series will depict its characters in the fairy tale.

She has neither aspiration nor emotion and her smile is sarcastic. Eun-jo is a girl who has apathy toward life. Her mother, who has been living as a single mother for 18 years, finally found the right person to marry and brought Eun-jo into the stepfather's house.

A decent house and a decent family.. Eun-jo feels that everything in this house does not fit for her. The most unbearable thing she faces is the stepsister Hyo-sun, who is the apple of her father's eyes and beloved by everyone in the house. Hyo-sun also takes away the mind of Eun-jo's mother, just like her bright and untainted character attracted all the other people. Eun-jo cannot tolerate this situation, since she lost the only one that she completely owned.

She sets her mind on getting even with Hyo-sun. "Cinderella shouldn't be loved by her stepmother. You broke the rule! I'll pay you back by taking away what you have and will have! But then... What should I do first?"