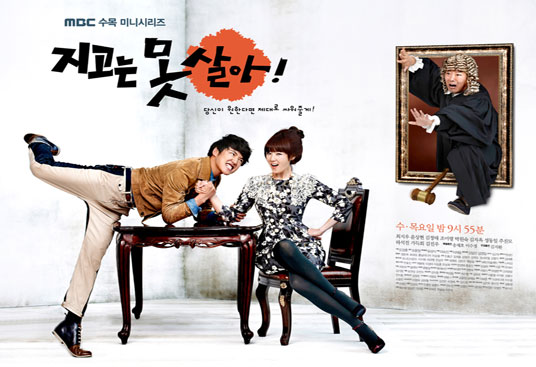 Choi Ji-woo attempts at her first romantic comedy in MBC drama "Can't Lose" and has found her part well.

On the first episode, was Hyeong-woo (Yoon Sang-hyeon) and Eun-chae's (Choi Ji-woo) fast romance as they decide to get married in two weeks after kissing on the first date.

Later they enter the stage of ennui and lines that sympathize with married couples come back and forth, along with the actor and actress's excellent performance. Choi Ji-woo was the climax. Icon of purity and innocence Choi Ji-woo was now broken and comical in her first romantic comedy.

Choi Ji-woo transformed into a Korean housewife. She was always asking for money from her unskilled husband and even fought with him about sexual protection in an affectionate scene. She ran around singing while drunk and fought with her husband making funny faces. She was also dirty. Her car was a trash can on wheels and when Hyeong-woo wasn't home, the house became a trash can too. She was completely possessed as tough and messy housewife Eun-jae.

They said to each other, "I thought you were just tough when we were dating but I didn't know you were just messy", "How dare you point out at me when you can't even make money" and "I wondered why you didn't mention money first, you're always talking about money" and more.

Eun Jae and Hyung Woo are both highly competent lawyers. They met and fell in love at first sight without even knowing each other's occupations. However, now in the midst of their divorce proceedings. Their relationship was initially sweet and loving, but their marriage slowly began to crack under their constant fights.