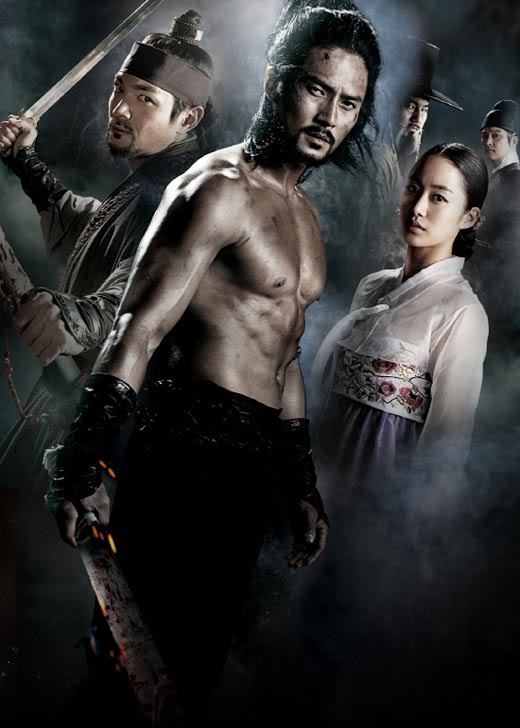 I've mentioned cable drama Yacha before as a new OCN show boasting a high budget, special effects, and lots of action. The 12-episode series premiered last weekend to a very impressive  one might call it shockingly high  ratings number of 3.5%. To put it into some perspective, this is a cable drama that airs on midnight on Fridays, where anything above 1% would be hailed a success.

Yacha is set in the Joseon era against the backdrop of a secret organization running under the king's authorization. The story unfolds around two brothers and one woman, and incorporates themes of fate, ambition, and revenge.

The buzz has been building and Yacha has sold broadcast rights in Japan, which is doubly noteworthy since the drama has barely aired in Korea and boasts no big-name stars. (The leads include Jo Dong-hyuk of Winter Bird, Jeon Hye-bin of Scale of Providence and Seo Do-young of Friend, Our Legend, so they're not complete unknowns, but they don't command the international fanbase that usually comes with foreign success stories.) Yacha will be airing in Japan sometime next year.

According to a source with the production house, Yacha made a strong impression with its short teaser video, and also has the added draw of Damo and Jumong's writer, Jung Hyung-soo, and Joseon Mystery Detective Jung Yak-yong PD Kim Hong-sun.

Okay, now with that out of the way I have to say I kind of hated it.

Caveat: I didn't finish watching the first episode, so take what I say with a grain of salt. But as I tried to sit through it, my sense of distaste kept growing and I felt like I needed to get away from it, so I stopped.

I was looking forward to Yacha with some curiosity and optimism, since the last cable show I watched turned out to be so fantastic (Joseon X-Files). And right away, I could tell that this drama had a lot of skill and attention to detail poured into it. It's super stylized so that it's not so much a sageuk as something out of a graphic novel. The colors are washed out, the contrasts are intensified, and there's an almost glossy sheen to the imagery  dark, gothic, beautiful in a haunting way.

The drama is also edgy in a way that you just don't get on broadcast television, and I don't just mean the nudity or sex or violence, although those all push it into the realm of 19+ cable show. It's the way it stylizes those elements  it turns killing into a thing of beauty, shooting out blood in artistic arcs, letting it spatter in beautiful sprays. In an early scene, a woman is tied up against a wall, where arrows are shot into her for sport while she screams in agony. The sex is cold and lifeless, even when you've got a four-way going on that ought to be titillating or exciting but is sorta just there for shock value. It reminded me of how I felt watching 300  beautiful in a polished, antiseptic way.

On the other hand, if this kind of thing floats your boat go for it! And tell me what you think! I checked out before I got a good grasp of the story, so let me know if I'm missing something great.