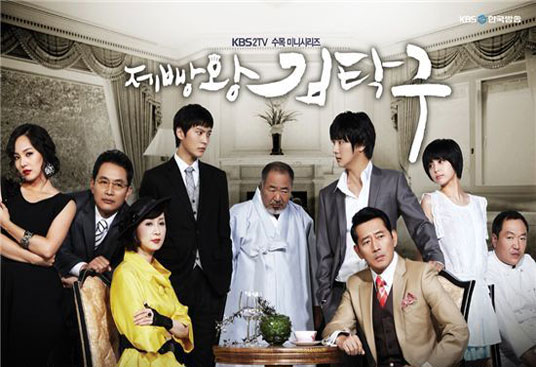 King of Baking, Kim Takgu (Hangul: ??? ??? Jeppangwang Kim Takgu), also spelled Takgoo, is a South Korean drama TV series broadcast on Korean Broadcasting System (KBS) that aired after Happiness in the Wind from June 9, 2010 to September 16, 2010 . The show stars Yoon Si Yoon (???) as Kim Takgu, Joo Won (??) as Gu Majun, Lee Young Ah (???) as Yang Misun and singer Eugene (??) as Shin Yukyeong. It tells the story of how a determined young baker over comes many trials towards his goal of becoming the best baker in Korea. This story takes place in the 1970s to 1990s, starting after his conception and finishing when he reaches his mid-20s.

The English version was renamed Bread, Love and Dreams and was broadcast on KBS World. It contains subtitles, rather than being dubbed. The show was broadcast in South Korea on KBS2 and internationally on KBS World. The series became one of the most watched show in South Korean history, with its final episode receiving a 50.8% viewership rating (the record still belongs to the drama First Love but considering that it was broadcast at a time where there much less TV channels in Korea, Kim Takgu could be considered the most watched Korean TV series ever). The show's storyline stretches the entire season which was broadcast on Wednesday and Thursday nights. Despite its popularity, like most of KBS' dramas it only lasted one season. One of the shows main songs, "Hope Is a Dream That Never Sleeps" was sung by Super Junior's Kyuhyun.

Kim Tak Goo is the eldest son of Goo In Jong, the president of Samhwa Enterprise, a legend in the baking industry. Although he is an extremely talented baker and seemed destined to succeed his father as president, Goo In Jong's family plotted to rob him of his inheritance because he was born to In Jong's mistress. Tak Goo's determination to become number one in the baking industry drives him to rebuild his career from scratch despite the many trials he faces.

KBS drama "Bread, Love and Dreams", which premiered on 9th June, remained strong on the primetime lineup of Wednesday and Thursday nights, maintaining its second weekly No.1 position on TV charts.

Figures from TNmS (Total National Multimedia Statistics) on Friday indicated that the viewership ratings for "Bread, Love and Dreams" shot up by an average 10.6 percent from last week with a score of 28.5 percent on June 16 and 25.3 percent the following day.

Statistics released by AGB Nielsen Media Research revealed that the newly released drama brought in lower ratings of 26.4 percent on Wednesday and 24.2 percent on Thursday.

"Bread, Love and Dreams", set to show its fifth episode next week, is about the success story of baker Kim Tak-koo, played by Yoon Si-yoon.