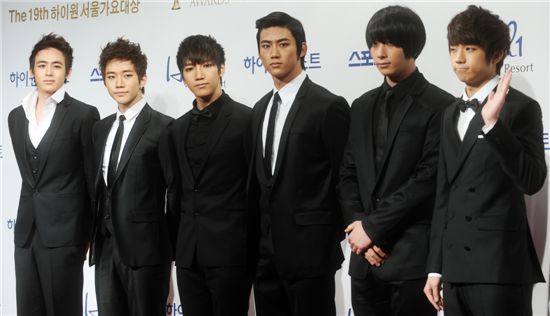 Six-member idol group 2PM are in preparations to make a comeback to the local music scene in late April, according to their agency JYP Entertainment on Monday.

"There have been a series of unfortunate events lately such as the sinking of South Korea's naval ship Cheonan but if there aren't any other problems, we hope to release the new album this month," a representative from JYP explained.

"The group will return with a mini-album and are currently rehearsing their dance moves for the stage," continued the rep.

2PM made their debut originally with seven members in 2008 with their first single album "Hottest Time Of The Day."

Leader Jae-beom however, quit the group last September after sparking national controversy over comments he made on his MySpace account before his debut.

Despite a much-anticipated comeback to the band, the former singer parted with his agency for good in February over "a huge personal wrongdoing," according to JYP.

The group had continued their singing career with six members since their leader's departure last year, making a successful return with their first full-length album "1:59PM" in November which featured their title track "Heartbeat."

Members of 2PM have ventured onto individual projects starring in variety programs and appearing in dramas.