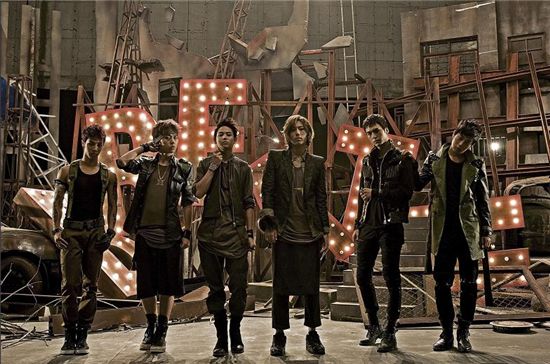 
Preorders for BEAST's first Japanese single "SHOCK" has taken over a Japanese music chart, according to their agency Cube Entertainment on Thursday.

Cube announced in a press release that preorders for "SHOCK," which is set to go on sale on March 23 and produced in four editions, placed within the top ten slots of the daily preorder chart for major record retailer Tower Records on January 25.

The chart revealed that version C (CD+Japanese version of the music video for "SHOCK") and B (CD+plus a video of the boys) of the album have placed at No. 1 and 2, respectively, and version A (CD+tee-shirt) at ninth.

The group's upcoming DVD titled "SO, BEAST - THE CLIPS," to be released on March 2, came in fifth place on the chart as well.

"We were surprised at how well the preorders are doing," an official from Cube told 10Asia over the phone on Thursday, "It's great to see how fast the album has climbed up the charts since preorders began last weekend."

Composed of other members Du-jun, Hyun-seung, Dong-woon, Gi-kwang and Jun-hyung, BEAST made their debut in October 2009 with their first mini-album "BEAST IS THE B2ST."

The boys held their first showcase in Japan on November 27 last year titled "The Legend of Beast Vol. 1" which attracted over 10,000 fans. They have also entered Japan's prestigious Oricon chart with their album "BEAST-Japan Premium Edition."

They have been taking a break from promoting their album since December last year and are currently preparing for their encore concert to be held on February 18 and 19 in Korea.