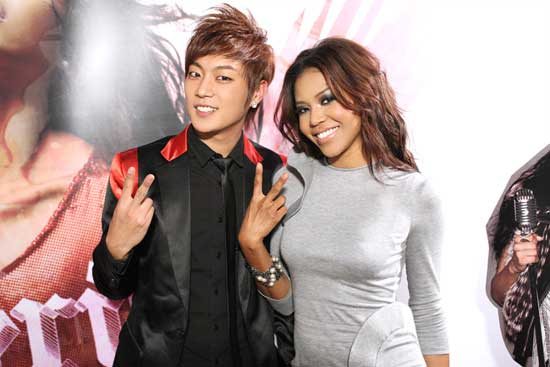 U.S. pop star Amerie claims that her all-time favorite Korean pop group is Roo'ra, one of the hottest groups in the country during the early 1990s.

The singer made the remark during an interview with boy band Beast member Yoon Du-jun on Mnet's music program "Popcon" while in Korea last week to promote the Korean edition of her latest album "In Love & War."

"I had listened to Roo'ra's songs since I was a little girl. They were one of the best groups," the songstress said, adding that she also enjoys listening to songs by BoA, Lee Hyori and Uhm Jung-hwa.

"It was great to meet the members of 4minute after having listened to their songs. They are a talented bunch of girls and I felt a sense of accomplishment sharing the stage with them," the pop princess said of girl group 4minute.

She had collaborated with the five-member idol group for her single "Heard 'em All" from album, performing the song at several venues during her five-day stay, including Mnet's weekly show "M! CountDown" on March 25.

She topped the prestigious Billboard Hip-hop/R&B charts multiple times and is a two-time Grammy Awards nominee.