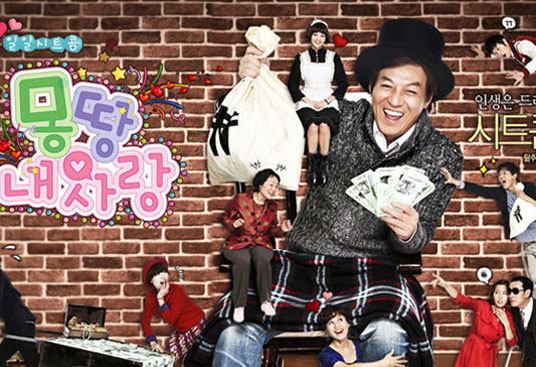 Also known as: Do Me a Favor

The story of the relationship between two families, based on the traditional Korean Cinderella folktale about Kongji and Patji. The Kongji family is poor but kind, while the Patji family is rich but selfish.

This is a sitcom about two families, Kongji's and patji's. The Kongjis are poor but kind, the Patjis rich but selfish Name and basic set up are from Korean Traditional Child Story Starring

Director Kim (Kim ap-soo) Director of a cram school As a filthy rich single man, he owns many cram school facilities. He lives with Jeon Tae-soo and Mr. Kim who take care of his business for him. At his cram school businesses, he's notorious for being cheap.

Park Mi-sun (Park Mi-seon) Mother of twins, Geum-ji and Oak-yup Her current occupation is a networking marketing coordinator. Despite the fancy title, what she's really working at is multi-level marketing. As a result, all of her relatives and old friends from school have turned their backs on her. Despite everything, she still dreams of striking it rich one day. Her husband passed away when their twins were young.

Hwang Oak-yup (Jo Kwon) Park Mi-sun's first twin He's been trying to pass the college entrance exam for three unsuccessful years now. But the truth is, he's just using his studies as an excuse to stay jobless forever. He is too lazy to work, and since he claims to study, his mom gives him money for his classes every month. That's why he can't give up being a phony student! He's a poor student, and he hates studying more than anything, but he makes all kinds of complaints to others saying he's "busy" with his studies.

Hwang Geum-ji (Son Ga-in) Park Mi-sun's second twin She's very greedy and ambitious when it comes to success. But she's just a vain, superficial girl who dreams of striking it lucky one day. Because she doesn't want people thinking she's poor, she fills an empty Evian bottle with tap water and pretends to be a rich spoiled girl. She makes sure she never lets go of anything that is within her possession, and at the same time, when she sees something she likes, she flips backwards to get it. She is the little goddess of greed.

Yoon Du-jun (Yoon Du-joon) Eun-hee's only son and Woo-jin's cousin He's satisfied with any kind of roof or food given to him. He's one easy guy to please! No matter how uncomfortable the surrounding may be, he can fall sleep within a second if he wants to. He has an amazing ability to adapt to any environment.

Yun Seung-a (Yoon Seung-ah) A very bright and polite girl Because she's so naïve, she sometimes mistakes other people's jokes and believes them to be true. She's very polite and tries hard to never step over anybody's boundaries. When she accidentally does something wrong to others, she feels genuinely sorry and tries to make up for it.