After School to star in new variety show on cable 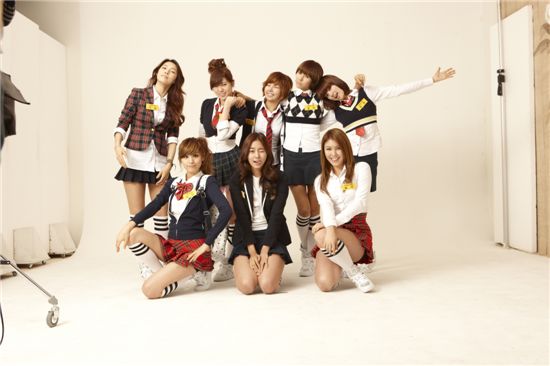 
Korean pop group After School will be starring in their own variety show titled "Play Girlz School, " according to MBC's cable channel on Wednesday.

MBC every1 said in a press release that the eight-member girl band will be appearing in the new show as students of the "Play Girlz School," a fictional school named after their official fan club which trains women how to have fun.

The show will feature the everyday life of the girls as they start living in a dormitory and learn about trendy ways to enjoy life.

Members have been promoting the school's 'entrance ceremony' to the public via their personal Twitter pages and mini-hompy on Cyworld, a popular social networking site in Korea.

The school entrance ceremony, which was shot at Seoul's Marronnier Park, featured the girls performing their hit songs as well as showcasing their individual talents.

After School made their debut in January 2009 with their first single album "New Schoolgirl" and gained popularity with the success of their second mini-album "Because of You," whose title single topped various K-pop music charts last year.