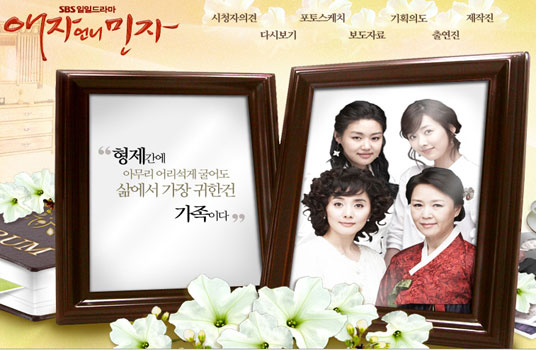 
This drama revolves around how Min Ja and Ae Ja understand the most valuable possession of one's life is family.

Min-ja (actress Cha Hwa-yeon) and Ae-ja (actress Lee Eung-gyeong) are sisters and as they were growing up, Min-ja was always regarded as the trusty elder sister while Ae-ja was known as the troublemaker. It was 27 years ago when Min-ja sent her sister Ae-ja on an errand to tell her suitor that she couldn't meet him on the day of their date because she had a stomachache but it so happened that Han Beom-man (actor Lee Deok-hwa) fell in love with her sister and got married later on. The lives of Min-ja and Ae-ja are a stark contrast to each other. Ae-ja lives in luxury thanks to her rich husband while Ae-ja lives the life of an ordinary housewife and is widowed when her husband dies a premature death. But Min-ja never laments her life and tries her best to raise her daughter.

Chae-lin (actress Soi Lee-hyun), who is Ae-ja's daughter but raised by Min-ja, meets Park Ha-jin, a documentary filmmaker, while selling coffee at her coffee stand. They become friends and their relationship blossoms later on. However, Sae-ah (actress Song Lee-woo), who is Chae-lin's half-sister, also begins to pursue Park Ha-jin. Sae-ah, a self-absorbed girl, is attracted to Ha-jin (actor Doh Lee-sung) because he treated her differently from the other men she dated but when her fathers business goes bankrupt, she moves into her aunt Min-ja's home and decides that the only way to get back to the life style she pines for is to marry a rich man and that means she would have to break up with Ha-jin. She then dates Kim Joon-seok (actor Kim Hyun-jin), who appears to be from a wealthy family. It turns out that Ha-jin is the eldest son of the founder of a giant construction and engineering firm while Joon-seok is a con artist who is posing as a rich man when he's actually dirt-poor. After learning the truth about the two men, Sae-ah tries to rekindle her relationship with Ha-jin, who is already in a relationship with her half-sister Chae-lin. When Sae-ah learns that Chae-lin is actually her half-sister who was born during a reckless period in her mother's life, the lives of Ae-ja, Min-ja, and Chae-lin are changed forever...