Acoustic Cafe to hold concert in Korea next month 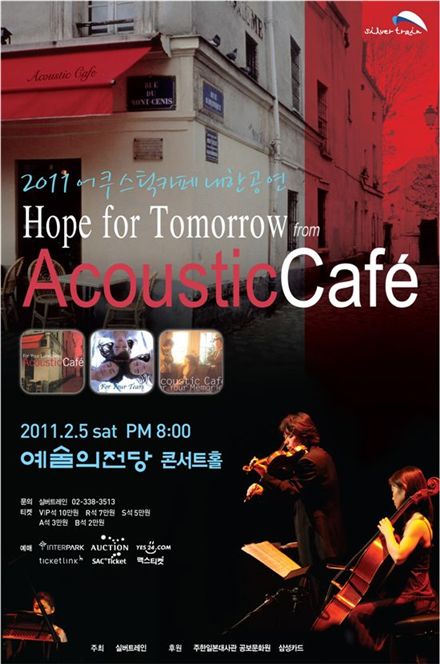 The concert promoter's Silver Train announced on Wednesday that Acoustic Cafe will take the stage at the Concert Hall in Seoul Arts Center in Seoul for their concert titled "Hope for Tomorrow from Acoustic Cafe" on February 5.

The group will be performing several of their hit songs including the theme of their concert "Hope for Tomorrow" as well as "Last Carnival."

Composed of members Norihiro Tsuru (violin and composer), Ayako (cello) and Yuri Hiranuma (piano and composer), Acoustic Cafe made their debut in Japan in 1990. They held their first concert in Korea in 2008 with their song "Last Carnival."

The trio play a variety of music on their instruments including classical, movie soundtracks, pop, new age, tango and from musicals. They have also released several albums in Korea including "For Your Loneliness," "Sky Dreamer" and "Sea Dreamer."