"A Song For First-Time Lovers" jumps to No.1 on Gaon chart 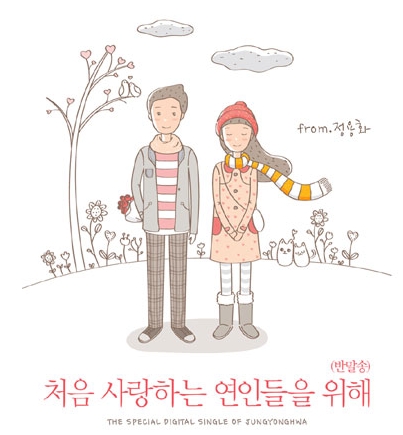 Album jacket of "A Song For First-Time Lovers"


"A Song For First-Time Lovers" by CNBLUE member Jung Yong-hwa arrived on top of Gaon's weekly singles chart during the fourth week of January.

The song, whose lyrics are about new lovers trying to become more comfortable with each other, climbed 11 steps from the second week of the month to top the chart.

The ballad was originally a duet by Jung and Seohyun of the Girls' Generation who appear as a make-believe married couple in MBC's reality show "We Got Married."

Second on the singles chart was "That Man" by actor Hyun Bin which got pushed down a step.

"That Man," which is part of the soundtrack to SBS hit-drama "Secret Garden," was originally sung by songstress Baek Ji-young but shot to the top of various charts when the actor himself came out with his own version.

The drama, which is a romantic fantasy about two people in love switching souls, finished its run two weeks ago.

Coming in at third was "Tear Stains," also a soundtrack to "Secret Garden" sung by singer and actor Yoon Sang-hyun who played a singer named Oscar in the show and even released a single album under that name this month. The song soared 63 steps from previous week.

On the albums' chart, "V.V.I.P," the first mini-album by Seungri of the five-member boy band Big Bang debuted at No. 1

The new album composed of seven tracks including double title tracks "V.V.I.P" and "WHAT CAN I DO" has been sweeping the top slots of several music charts since its release on January 20.

Following in second place was the album to aforementioned drama "Secret Garden Soundtrack Special" which is a complete collection of all the songs featured in the drama plus their instrumental versions.

Meanwhile MBLAQ's first full-length album "BLAQ Style" that features 13 songs including two title tracks Stay" and "Cry" was pushed back a step to land at No.3.