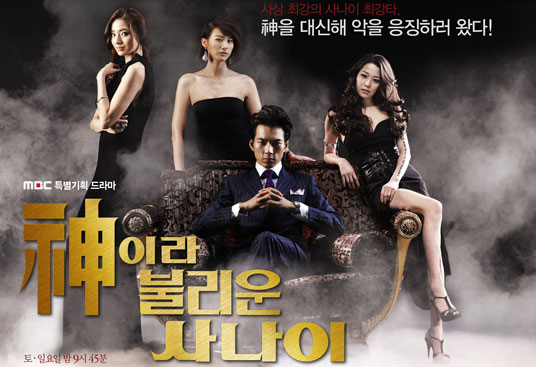 Choi Kang-ta is a super agent with a feared reputation. He lost his parents and was adopted by Americans. After becoming an adult, he returns to Korea to avenge his father's wrongful death. He learns that there were four people involved in the killing of his father.

In the midst of carrying out his revenge, his partner, Vivian betrays him, putting his life in danger. However, he is nursed back to health by Bo-bae, a woman he met by coincidence. After recovering from his wounds he settles down in a slum neighborhood where he befriends the poor people there. For the first time in his life, he is surrounded by warmth and love in his new surroundings.

But Hwang Woo-hyun, a high-ranking official at the Korean Central Intelligence Agency and heir to the Hwanglim Group empire, becomes enraged with jealousy that Choi Kang-ta stole Bo-bae away from him and decides to have him eliminated. Will Choi Kang-tae be able to avenge his father's death? And will Bo-bae choose Choi Kang-ta over Woo-hyun?

He's a strikingly handsome man and resourceful person with many skills. He was orphaned when he was 7 years old when his parents and sister were killed. An American couple adopted him and he grew up in America. When he becomes an adult, he partners with Vivian on secret missions with great success. Due to his tactical brilliance, he is promoted to the leader of his spy team. He returns to Korea whereupon he learns about the wrongful death of his father and decides to get to the bottom of it. But he meets a charming journalist named Bo-bae by coincidence and falls in love with her. He also learns that Bo-bae's father was behind his father's death.

She stands up for justice and has tenderness towards the people she loves. She's an attractive investigative journalist. Both Kang-ta and Woo-hyun are in love with her. Who will she pick among the two men?

As the brains behind the Korean Central Intelligence Agency, he's a cerebral man who makes calculating decisions in his line of work. He is in love with Bo-bae and becomes overcome with jealousy when Kang-ta enters the picture. This also triggers his competitive streak. When he learns that Kang-ta made threats to his father, he decides to have him eliminated. Blinded by jealousy, he kidnaps Bo-bae and faces off against Kang-ta.

The sole heiress to the Castle fortune. She's a dedicated member of Kang-ta's spy team and obeyed orders. But when Kang-ta falls in love with Bo-bae, she becomes jealous and betrays him.

Her family is influential and affluent. She's a beautiful woman who has it all. Unaware that Kang-ta approached her with the objective of destroying her father's company, she unknowingly helps him with his mission.