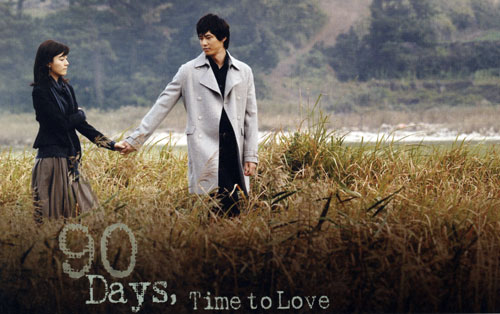 Brief Synopsis
A fate that surpasses taboo, A love that surpasses morality Here, at the peak of his life at thirty-one years of age, is a man who is fated to vanish into space as a mere speck of dust in three short months. (In 90 days, I will surely cease to exist,yet the world will go on as if nothing has happened. Even my wife will someday dry her tears,telling herself that the dead are dead and the living must go on living. Then, would it be wrong to ask my wife for a leave of absence during my remaining 90 days?) The fall of 2006. A man and a woman were fated to meet, but their hearts were destined to be broken in the end. They are now desperately pleading for 90 days in which to love each other for the last time on earth. If you were this man's wife, or this woman's husband, how would you answer their pleaa plea that transgresses both morality and taboo...?

It's utterly preposterous! In fact, it' so preposterous that all I can do is laugh! Nine years ago, when my foolish father ended up a suicide bomber,I was forced, with gritted teeth, to coldly abandon my beloved Mi-yeon! And now they tell me I'm going to die, too.Just... like... that.Hearing the doctor pronounce that I had only three months to live,the face that flashed before my eyeswas the girl I left behind... the girl I buried in my heart... Mi-yeon.

Since he deserted me, I had been dying each day,bearing a scarletletter I had carved into my own heart. But now he tells me that he is actually dying.That he will die and vanish from the earth.With three months to live, he came back to me at the dead end of his life.It was because he couldn't bear to die without me, because he wanted to live with me...The knot left in a corner of my heart when he cast me off feels as if it were dissolving away.I had loved him... to the point of madness.

There have been no vicissitudes in my life.I have never even hated anyone.My husband has always been lukewarm toward me,but I kept telling myself that so few married couples ever share a burning love.But now... my husband tells me he is dying.And what is even more unbelievable is...that he wants to live out his remaining three months with a woman named Mi-yeon.Through nine years of marriage, I've never had a place in my husband’s heart.

I know what my flaw is.My fatal flaw is...that I cannot become a cruel man,that I cannot become the kind of man who would hurt Mi-yeon.Mi-yeon likes men who cause her pain.My common sense tells me that such a thing cannot be love,but Mi-yeon persists in believing that it is.