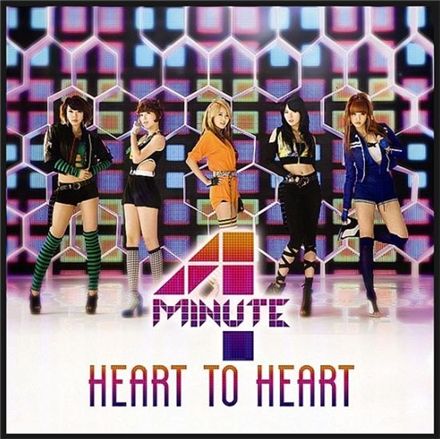 
Girl group 4minute is set to release a new Japanese single in late August of this year.

The official website of Universal Music Japan showed on Monday that the five-member girl group will unveil their fifth Japanese single "Heart to Heart" on August 24.

The upcoming single which will be the Japanese version of the group's third single of the same name released in Korea on March 29 this year, will hit stores in three limited editions; in CD+DVD (type 1), CD+DVD (type 2) and CD-only format.

The album's cover and details to the DVD have yet to be revealed. added the website.

Composed of Hyun-a, Ji-hyun, Ji-yoon, Ga-yoon and So-hyun, 4minute appeared in the music scene with their debut single "Hot Issue" in 2009 and has since enjoyed success in several Asian countries including Taiwan and the Philippines with their mini-album "For Muzik."

They were also the first K-pop female band to branch out into the Japanese market in early May last year and most recently, released their single "Heart To Heart" in Korea which they followed up with their first regular album "4Minutes Left."