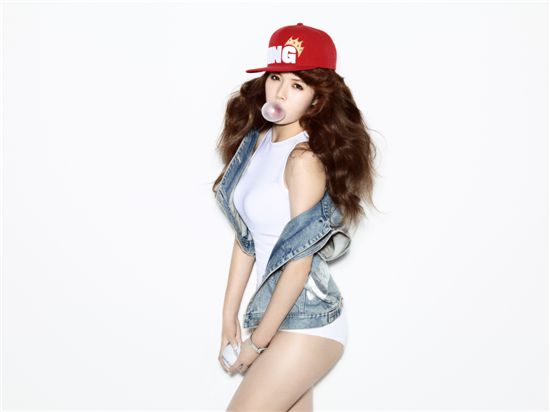 
Hyun-a from girl group 4minute will make a solo comeback to the local music scene with a new album next month, announced her agency Cube Entertainment on Monday.

Cube explained in a press release that Hyun-a, the rapper of the quintet, is set to release her first mini-solo album on July 5 and in line, unveiled two of the album jacket images today both online and offline.

In one image, Hyun-a is seen wearing a white bathing suit and a red cap, holding a baseball and blowing a bubble gum while the other image features her in red sweater with her back slightly revealed to show a tattoo.

Hyun-a, 19, debuted in 2009 as member to 4minute, also composed of other girls Ji-hyun, Ji-yoon, Ga-yoon and So-hyun with the debut single "Hot Issue" and has since enjoyed success in several Asian countries including Taiwan and the Philippines with their mini-album "For Muzik."

Her group was the first K-pop female band to branch out into the Japanese market in early May last year where they produced three Japanese singles including "Muzik," "I My Me Mine," "First" and the group's first full-length Japanese album "DIAMOND" and another single "WHY" in early March this year.

After returning to Korea in late March, they released their single "Heart To Heart" and followed it up with their first regular album "4Minutes Left" composed of 10 tracks including the title track "Mirror Mirror" in early April. 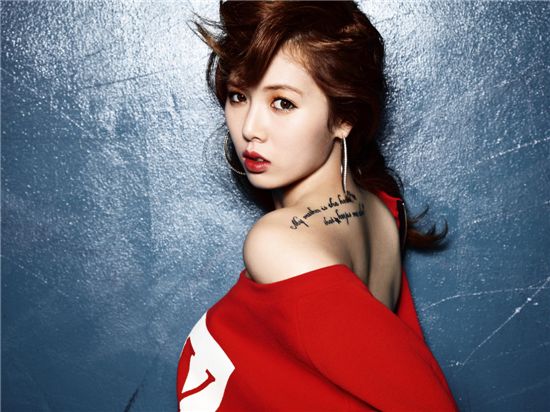