3 TVXQ members to make comeback as JYJ next month 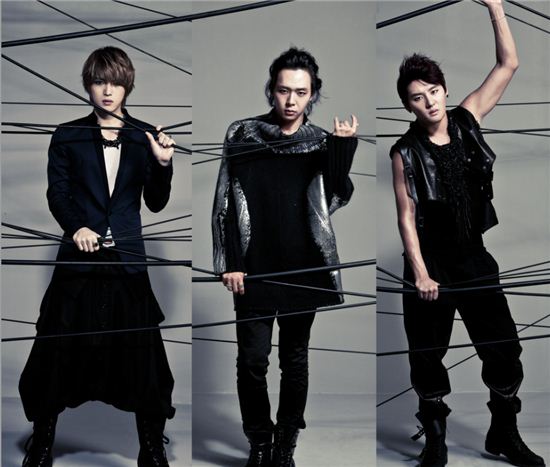 
Hero Jaejoong, Micky Yoochun and Xiah Junsu, whose singing careers as members of group TVXQ have been on a halt since being involved in a legal dispute with agency SM Entertainment, will make a comeback to the music scene next month as a trio named JYJ.

The group's publicist Prain Inc. announced through a press release Wednesday that JYJ, representing the first letter of each singer's name, will release their worldwide studio album titled "The Beginning" on October 12.

Recorded in English, a total of 10 tracks including seven new songs and three remixes will be featured on the album.

"Ayyy Girl," the first track on the upcoming release, was produced by 14-time Grammy Award-winning rapper Kanye West and features Malik 'The Poet' Yusef, called the maestro of spoken word.

And Rodney Darkchild Jerkins, who has worked with top global artists such as the late King of Pop Michael Jackson and Britney Spears, composed "Empty" and "Be My Girl" for the new album.

"I am extremely happy to be taking part in JYJ's world debut...... It was a very special and precious project," Jerkins was quoted as saying.

The three idol singers contributed to the record as well with self-written songs; Hero with "Still in Love," Micky with "I Love You" and Xiah with "I Can Soar."

Warner Music Worldwide will be in charge of the album's simultaneous release worldwide on October 12, the same day a special limited edition of the record will go on sale for 99,999 cents. Further details on the album can be found at www.jyj-thebeginning.com

Hero, Micky and Xiah debuted in 2004 as part of five-member boy band TVXQ but despite seeing phenomenal success in the Asia region, they ceased to remain a single group when in July of last year, they filed a lawsuit against SM questioning the validity of their 13-year contract.

After the court sided with the boys, they maintained their presence in Japan by signing with major entertainment group Avex earlier this year but Avex abruptly suspended its relation with the three just last week, citing concerns over the boys' Korean management agency C-JeS Entertainment Co.

Avex stated it cannot promote JYJ's activities in Japan since reports were saying that the head of C-JeS holds a criminal record and that he is also related to a criminal organization, although Avex remains the legal representative for TVXQ in Japan.

The trio refuted Avex's statement, arguing that Avex had been aware of the criminal record but that he was unrelated to a criminal organization. They rather claimed that Avex brought the reason to issue when JYJ failed to agree to new terms of a contract Avex drew up.

"We cannot rid ourselves of the thought that Avex regarded us as a tool for their company's profits rather than treating us as artists. We are just frustrated that we cannot say when we will be able to meet with our Japanese fans now. We ask for your active support and interest for the resolution of this," the three said in the statement.