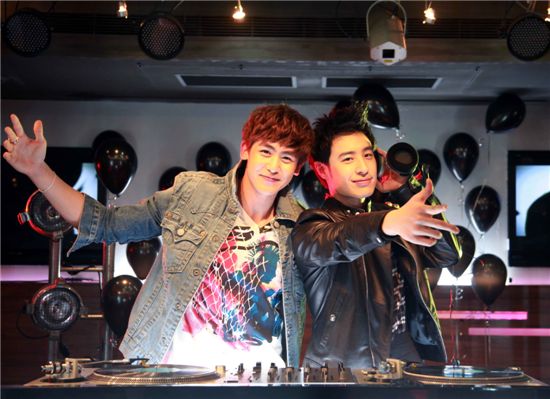 According to a press release by JYPE today, Nichkhun took part in the filming for renowned Taiwanese singer Wilbur Pans music video for "Touch (Chu Dong)" which is a title track to his latest album "808" set for release throughout Asia on January 31.

The music video was shot late on January 22, immediately upon 2PM's arrival in Taiwan due to both parties leading busy schedules.

"It was a new and interesting experience and I cant wait to see how the music video turned out," Nichkhun was quoted as saying while revealing his expectations for the upcoming music video, according to the statement.

Nichkhun whose real name is Nichkun Buck Horvejkul, is a Thai-American singer who was discovered and trained by JYP Entertainment and made a debut as one of the singers and rappers for six-member boy band 2PM with a single album "Hottest Time Of The Day" in 2008. The boys made a debut in Japan last month as well.

Nichkhun also makes regular appearances in MBC reality show "We Got Married" with Victoria from girl group f(x) as a make-believe married couple.

Pan himself is a highly popular singer, rapper, actor and a record producer in Taiwan, well known in Korea as well as in China Japan and Southeast Asia with hit albums "Gecko Stroll," "Around the World" and "007." His latest album "808" too, has already topped eight music charts in China, Taiwan and Hong Kong since its release two weeks ago.