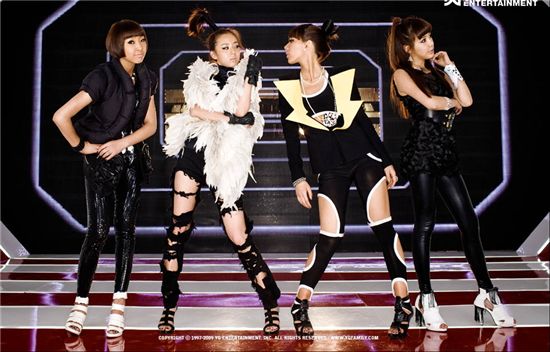 
Korean girl group 2NE1 have succeeded once again in taking over various online real-time music charts with their new song, according to the respective websites on Friday.

Their latest song "The Coolest," which was released yesterday midnight, made its debut at the No. 1 spot on the online music charts of Cyworld, Daum, Naver, MelOn, Soribada, Mnet, Bugs, Dosirak and Monkey 3 today.

"The Coolest" is the third track from their upcoming mini-album set to go on sale on July 21. The new release will include their previous singles "Don't Cry" and "Lonely," which also triumphed in first place on the aforementioned music charts, as well as two or three more new songs.

Meanwhile, YG Entertainment had announced that the release date for the music video of "The Coolest," originally set to be revealed today, has been delayed by a couple of days due to its scale.

2NE1, formed of members Park Bom, CL, Sandara Park and Minzy, is known as one of the most popular girl groups since making their debut in May 2009. The girls have been busy preparing to give their first time performance of "The Coolest" on SBS' music program "Inkigayo" this weekend.