2 Outs in the 9th Inning 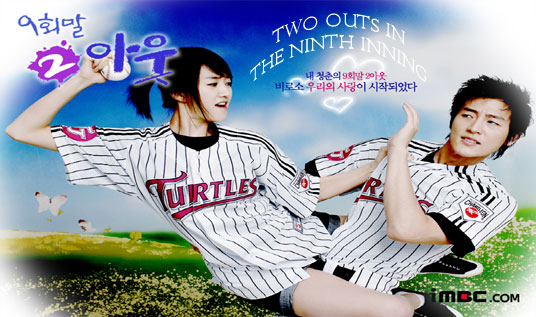 
Brief Synopsis
In life and in baseball, you need comebacks!

A poet once said that the party is over at 30 but 'Two Outs, Bottom of the Ninth' counters that with the mantra that the party starts at the age of 30. Hong Nan-hee (actress Soo-ae) has never hit a home run in life, not to mention a single as she reaches 30. She thought she worked hard to get ahead in life but all she has are some small savings in her bank account and a mother nagging her to get married. But she has one thing to be happy about in her life. Her current boyfriend is Jung-joo, a talented baseball pitcher who is aiming to play in the big leagues in America and eight years her junior. But her mother disapproves of her daughter's crazy choice.

One day, a childhood friend of Nan-hee appears in her life. And he's Hyung-tae (actor Lee Jung-jin). Hyung-tae thinks he got over Nan-hee but is that really true? As a friend tells Hyung-tae that life begins at the bottom of the ninth with two outs, we'll see how the game of life unfolds.

Life imitates baseball. You always get a second chance even when you're losing. The 4th batter at the plate could drive in a home run at the bottom of the ninth inning to win the game or the opposing team could make a game-losing mistake and allow the player on third base to score. The game of baseball is full of surprises and comebacks. There are times when you need to step up to the plate and do whatever it takes to pinch-hit a single down the field. Or you have to take a bunt to send a fellow player home. Fly balls... Pitchers intentionally walking the hitter... These are a few of the baseball strategies that are used to sacrifice a play to win the game. The pitcher tries to outsmart the batter and the batter waits for the change-up pitch to smack the ball out of the stadium. In baseball, every player, coach, and benchwarmer has to be on his toes. Because there's no way of knowing whene whom he has grown up with. '9 End 2 Outs' is using the baseball theme to compare to the fates and lives of the people in love.

She learned that Santa Claus wasn't real when she was 8 years old and at the age of 14, she realized that she wasn't the center of the universe that she thought she was. When she turned 17, she had her first date. At the age of 20, she learned the meaning of love and at 27, she found out that nothing lasts forever... Turning 30, her body is telling her that the party is over. Those youthful days were wasted on pursuing fruitless dreams. So she's at the point in her life where she has already struck out three times at bat without even hitting one single. The future is unknown and she's getting nervous about her dating prospects. She works at a publishing company that is deep in the red and her salary is lower than what entry-level employees make at a start-up company. Sometimes her employer will miss her paydays. She has all the qualities of a thirty-year-old single woman. She's a nice girl but she didn't get to where she is by being nice all the time. She's picky, obsesses over good hygiene, and can pretend to be innocent at times. She's a sucker for sweet talk. Little gestures of kindness can melt her heart. She's emotional. But she doesn't tell sob stories, which is a good thing for men. Overall, she has good morals and a healthy perspective on life. She's an honest person and stands up for justice but that doesn't necessarily mean that she's a tough cookie. She can never find her way around places and is a klutz around machines. With a fickle personality, she tries to act like she’s an independent girl but in reality she emotionally depends on other people. She is always planning her next diet program while munching on junk food. She likes worrying over unproductive things in life. At times, she'll annoy her friends by asking the same question over and over again. In life, she's insecure and feels like she's falling behind if she's not doing something at all. Even though she earns less than what a teacher makes, she signs up for lots of different exercise programs that is way out of her budget. Rather than being on the pretty side, she has a cute look. Though she talks confidently when debating with people, her arguments don't hold up. Her conscientious personality and goofy behavior are balanced out perfectly. She's close to being the perfect woman to date but she's not quite there. Even though she is a vain person, she doesn't reveal it overtly because of her pride. Oh, what a dilemma.

He learned from Nan-hee that Santa Claus wasn't real at the age of 8 and became curious about what was between the legs of girls at the age of 13. At 17, he learned that he was a handsome-looking guy compared to his peers and then learned the meaning of love at 20. He fell in love when he was 23 and realized that nothing lasts forever at the age of 27. Turning 30, he realizes that he was lying to himself that he had no feelings whatsoever for Nan-hee... He wasted his entire youth on his many 'conquests.' Compared to Nan-hee, who kept striking out, he has better stats and is a winner. But as everything seems to be going perfectly in his life, life comes at him fast in the 7th inning when he was on the verge of winning a no-hitter game. The pinch hitter, the first girl he ever dated, steps up to the plate. When he's on the pitcher's mound he carefully studies the opposing player. He throws a fastball while clenching his teeth. And the batter hits the ball over his head. The crack of the bat fills the stadium! The ball goes all the way out of the ballpark and it's a home run. He thought it was a fluke and brushes it away as he focuses on the next batter. But he gives up three more consecutive home runs and is humiliated. He gapes as another ball goes over the fence. Then he collapses into a heap on the mound.

Since that game, he’s been in a bad slump. He is basically a nice guy. He has a sense of humor, a warm personality, and good manners. He's also a guy who likes to take chances in life. The number and type of girls he has dated is endless. With his charming looks, he is still fit and athletic at the age of thirty. When he sets his eyes on a woman, he’ll usually get a date with her. That is how his live has unfolded until...

A college student. He's a pitcher on his college team. Sporting a brown tan, he is an athletically built guy. There is a pure soul within him. A guy with youthful energy! He has his mind set on making Nan-hee his girl. He first met Nan-hee at an English language institute and fell in love with her at first sight but Nan-hee keeps rejecting his overtures. He follows Nan-hee everywhere and although Nan-hee was adamant that she wouldn't date him... Wearing a big smile, Jung-joo runs towards the crowd after striking out the last batter to win the game. He picks up Nan-hee who was sitting in the stands and carries her on his shoulders around the baseball field like a madman in front of a packed baseball stadium. No girl wouldn't fall for a guy who could do that for a girl... He is in love with a girl who is 8 years his senior. Some friends call him a lunatic and others call him a guy chasing a dream... But according to Nan-hee, he is a lunatic. Jung-joo and Nan-hee are in a pathetic relationship if you think about it. They seem to have the best of everything in their relationship but it's an empty facade. Jung-joo is an average guy who doesn't fit the typical description of a younger man dating an older woman. He's immature, passionate to the point of being reckless, gets into fights, and sends pathetic text messages to Nan-hee. And he also proves the point that athletic talent and brains can't co-exist. His IQ is laughable. He doesn't read and if there is no gunfight in a film then it's not worth watching to him. He will go into a long spiel about the brilliant B-film comedies he has seen. Though he can't read Chinese except for the Chinese characters in his name, he studies English very hard. Since he doesn't care about what people think of him, he is not afraid of speaking up in class to speak broken English. He eventually becomes a fluent speaker in English. He trains hard to reach his dreams of making it to the big leagues someday.

A classical guitarist. She lived abroad for most of her childhood, following her diplomat father to the different countries he was stationed at. She learned how to play the guitar in Spain when she was just 5 years old. She is like the burning sun, the wind, the earth, and the sky. She has a smile that is fresh like the morning dew on a grassy field. When she is happy or having a great time, she radiates with joy. Freely expressing her feelings, she is unpredictable at times and makes snap decisions. She is passionate. And that also shows in the guitar performances she gives. When she furrows her brow to concentrate on her performance, she will overwhelm audiences with her dazzling talent and charismatic aura. Her strong spirit and flamboyant style overwhelms the people she meets but Sung-ah hardly cares about the effect she has on them. She's a very self-absorbed person who never shows any consideration to other people. When she started dating Hyung-tae, she had a promising future ahead of her as a professional guitarist. She and Hyung-tae are a passionate couple. She decides to break her contract with her agency by refusing to go to Spain for a performance. She never dreamed of becoming a famous artist when she was young. She simply plays the guitar because she likes to. 'My guitar is always next to me and I play it when I feel like it. Right now, I want to be with you because it makes me happy.' Her impulsive personality confounds men. Hyung-tae was only 24 years old at the time they first got to know each other and though he appreciated Sung-ah's feelings for him, he always felt uneasy around her. She told Hyung-tae that she sacrificed her career to be with him but Hyung-tae thinks that she could change her mind and leave him at any moment. And Hyung-tae's predictions become true.

2 Outs in the 9th Inning trailer