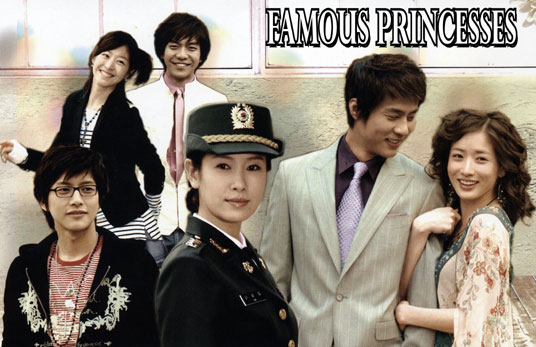 For KBS Wallpaper from this drama : http://www.kbs.co.kr/drama/chilgongju/image/wall/index.html

For KBS Photo Gallery from this drama : http://www.kbs.co.kr/drama/chilgongju/image/gallery/index.html

'Famous Princesses' is a story about four sisters, Deok-chil, Seol-chil, Mi-chil and Jong-chil, whose father is a retired military man. This humorous drama depicts the real-life stories of today’s families, eliciting both laughter and tears from its viewers. The life of the oldest sister, Deok-chil, whose unloving husband divorces her, shows problems facing remarried couples. The upbeat and confident second sister, Seol-chil, plays the role of a son to her parents and ends up fighting for love against her younger sister, the pretty but selfish Mi-chil, who is the family’s troublemaker. Finally, the youngest of the sisters, Jong-chil, becomes pregnant and marries her boyfriend at a tender age, facing numerous conflicts with her in-laws.

Na Seol-chil: A graduate of the military academy, Seol-chil is a fraternal twin of Mi-chil and holds the title of a captain. Her father trusts her the most as she is responsible and staunch and became a military officer according to his will. She regards her spoiled younger sister, Mi-chil, her rival as all guys she likes fall for Mi-chil.

Na Mi-chil: A troublemaker, Mi-chil graduates from a technical college and works as a nurse, but is always buried in debt due to squandering and vanity. She feels inferior to Seol-chil, to whom she was always compared as a student. Spontaneous, fun-loving and irresponsible, Mi-chil is a headache to her family. She deliberately seduces Il-han knowing that Seol-chil likes him but her selfishness is shattered when she learns that she was his first love.

Na Deok-chil: The oldest of the four sisters, Deok-chil has been married for 12 years. She is a good mother to her children and a good wife to her husband, but deep inside she is indecisive. She marries her brusque husband at her mother’s recommendation without any feelings for him and after living with him for 12 years falls in love with his best friend. She ends up cheating on her husband and getting a divorce from him, and creates a new family with another man.

Yoo Il-han: Il-han is torn between love and friendship of two sisters, Seol-chil and Mi-chil. This warm-hearted and sensitive guy is also responsible and sound-thinking. His somewhat conservative yet highly moral personality keeps him from dating women randomly. Gentle, good-looking and coming from a rich family, he is the ideal of many women.